We believe that Geography is a key foundation in helping children to understand their place in the world and their ability to influence the outcomes of human activities. As we prepare children to take custody of our planet, we aim to help them understand its beauty and fragility, and the power of their choices to protect it.

The geography curriculum has been designed on the concept of starting small and with the familiar then moving further afield and developing a greater depth of knowledge to underpin understanding and skills. It builds the skills that are necessary for secondary school as well as equipping our children with an understanding of maps, places and the world.

A major theme running through every topic is the identification of physical and human characteristics of the places. This is returned to frequently and in increasing depth across topics. This links to our understanding of how ‘who is in charge’ impacts human activity and its effects, which is a key thread linking our humanities curriculum.

In the Foundation Stage, early geographical concepts are begun through the Understanding of the World strand. Across the rest of the school, Geography is taught as a discreet subject in blocks

The children will begin to build local knowledge: my house – my street – my village with the focus being on Sutton Courtenay.

The children will learn about another town/city in the UK (London or Oxford or both).

They will study this city and make connections back to their knowledge of Sutton Courtenay.

In KS1 the children need to learn that the world is round (and point to the Equator), there are different continents, we live in the UK/England, surrounded by sea, weather patterns. They will also touch on there being four countries in the UK and their capital cities.

They need to know how beaches are made (two types of waves) and touch lightly on erosion. They could also learn about the importance of ports/trade.

Now, the children will look at Europe and study Italy (in detail) and Russia (in brief). Using Italy, they will learn about mountains, volcanoes and earthquakes. They will locate Italy and surrounding counties and think about trading across the land and seas. They will study Rome and Naples/Pompeii

The children will study Russia by looking at two cities in the west (Moscow & St Petersburg) and one in the east (Valivostok) learning their names and key landmarks. They start to learn about biomes using Russia to understand this e.g. polar in Northern Russia (Siberia), tropical in Southern Russia (Sochi on Black Sea coast).

The children will study Kenya and look at rivers, weather and climate (including climate change) and desert biomes. They will learn about Niarobi as a city and possibly compare with Mombasa (economy, growth, crime, poverty, culture) and study the Mara river in detail. They will then learn about other key African rivers (Nile & Zambezi) and make connections back to the River Thames. They will also learn about Migration and the effects this has on people and places.

The children will study Brazil looking at Rio (trade, economy etc.) and the rainforest as a crucial biome. They will then deepen their understanding of biomes/climate zones etc. They will be making connections between the biomes and places they learnt about in Y4 and 5.

Over their time at school, children will:

Become increasingly aware of how human activity has shaped the locality and wider world that they currently live in.

Build on prior-learning and explicitly make connections between what they have previously learned and what they are currently learning.

Become increasingly critical and reflective within their thinking be able to use these in their discussion and written work, making informed and balanced judgements based on their knowledge of the locational features

Explore and identify where the power lies in different localities and how this impacts on human life.

Geography is assessed through staff collaboration and discussion around the evidence of children’s work.  A summative judgement is made each year and reported to parents. 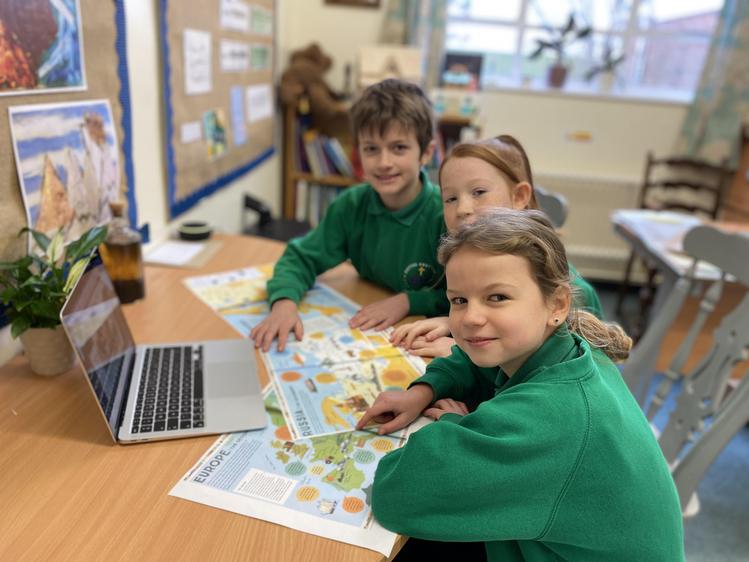 See how this group of Year 5 children were able to use their knowledge of European geography and history to explain their understanding of events in Ukraine, March 2022.

You can watch their conversation by clicking here.

Unfortunately not the ones with chocolate chips.

Some cookies are necessary in order to make this website function correctly. These are set by default and whilst you can block or delete them by changing your browser settings, some functionality such as being able to log in to the website will not work if you do this. The necessary cookies set on this website are as follows:

Cookies that are not necessary to make the website work, but which enable additional functionality, can also be set. By default these cookies are disabled, but you can choose to enable them below: